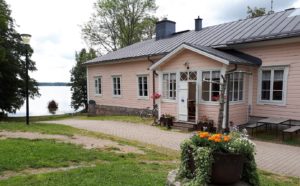 The great house of Vanhakylä Manor and Tuusulanjärvi lake today.

Vanhakylä Manor is situated in Järvenpää, on the shores of Tuusulanjärvi lake, about 60 kilometers north of Helsinki. A new phase in its history is underway, with the city restoring the historic environment and surrounding cultural landscapes on the cape of Vanhakylä, which is a historic environment of national significance in ​​Finland. Vanhakylä Manor became a kind of national landscape when the artist Pekka Halonen immortalized the manor in his work Avannolla; in English “by the hole in the ice”. It was exhibited at the Paris World Exhibition in 1900, as Halonen was commissioned to deliver paintings of the Finnish nature and peasant life. The purpose of the master plan for Vanhakylä is to renovate the manor park and the gardens of the villas built on the manor grounds, and to restore the surrounding historic landscape to what it was about a hundred years ago by clearing the overgrown meadows and managing the wooded hillsides.

There is an annual jazz concert on the cape of Vanhakylä, which is attended by 5,000 – 10,000 music lovers. On the cape of natural beauty is also located a museum of villa Kokkonen, a marina for yachts, a beach, a Frisbee golf course, riding stables, and a recently built extensive recreational trail network. In addition, the manor’s cottages have been leased to associations and clubs dedicated to outdoor and sports activities. The cost of the renovation is estimated to be several million euros and will be implemented gradually over the next decade. After that, the old historic environment will be properly maintained so that it will survive the abrasion of diverse activities and recreation in the future. The cape of Vanhakylä is one of the few places with free access to the shores of Tuusulanjärvi lake, which are otherwise quite developed with housing. It is a popular recreational area for both Järvenpää and Tuusula residents, and is a good complement to the attractions and tourist services of the Tuusulanjärvi´s cultural route. Therefore, the target is naturally set high. 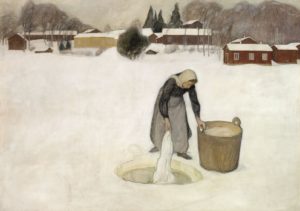 Painting of Vanhakylä Manor by Pekka Halonen. It was exhibited at the Paris World Exhibition in 1900 and became later an iconic picture of the vernacular landscape in Finland.

Ordinary story of a Finnish manor

Vanhakylä manor, also called Gammelby Gård in Swedish was first mentioned in the historic land books of Häme province in 1539 and consisted of five homesteads whose names have been preserved until today in the list of nearby rocks and hills. It became a noble country house in the 1620s and was owned by the Stålhane family until the early 19th century, when it purchased by more bourgeois families. The manor flourished in the late 19th century, but in the 20th century it began to deteriorate as the owners changed often and the land property gradually diminished. When it became a property of the township of Järvenpää in 1951, only 65 hectares of land remained. The outbuildings were soon demolished, the cottages were divided by walls and converted into rental apartments and the main building into a hostel. A nearby field was grassed over the next decade and a camp site was established there, which was later supplemented by cottages. No attention such as maintenance was paid to the environment for decades, and by the 21st century the whole cape was in very poor condition. In addition, parking areas, dining terraces and bier sheds, fences, a playground, a miniature golf, and technical buildings and other odd structures had been built around, so that the buildings of historic significance hardly stood out of disorder of installations. In the end, the redundancy of the campsite and the restaurant’s unprofitable operation drew the municipality’s attention to the degradation, as it was clear from the day that the degraded manor environment in such poor condition was not attractive enough.

Nature conservation as obstacle to comprehensive restoration of cultural environment

Efficient forest management in Finland has destroyed the habitats of many animal species. It has made them endangered and forced them to seek new habitats in other places. Some species have found such in overgrowing cultural landscape with lots of young decaying wood. With the Natura 2000 -program, many degraded cultural biotopes were protected, which has made it impossible to comprehensively restore even historic sites of national significance. This is also the case on the cape of Vanhakylä, where some parts of the nature are protected. In addition, there are extensive protected areas on both sides of the cape that used to be pastoral open meadows and have overgrown since the 1980s.

In Finland, nature conservation is understood to mean withdrawing from all measures, including care and even sanitation. At the same time there is no established practice for the protection, care and restoration of cultural environment and biotopes. Indeed, the low interest of cities and municipalities in the rehabilitation of cultural environments is well explained by the fact that it costs a lot more than doing nothing and is generally opposed with the rage of fire by the national authority for nature protection. That is why the City of Järvenpää is engaging in pioneering work for the new millennium in restoring the cultural landscape surrounding the Vanhakylä Manor.

The author works for the Nordic consulting company Sitowise Ltd. assigned for planning of Vanhakylä