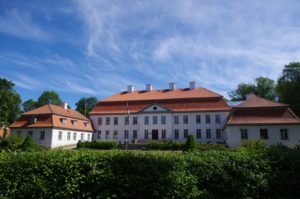 In the summer 2018, the Baltic states enjoyed a summer of open manor houses. There were 55 manors in Estonia, 45 in Latvia and 31 in Lithuania who agreed to do a common campaign.

The setup of the campaign was simple – every manor had the right to open the doors on the time suitable for them, the dates had to be shown on the common website and calendar. A common campaign gave a good overview of how events – theatres, concerts, exhibitions, festivals, etc. took place simultaneously. The campaign also gave a better understanding of how the manors maintain themselves. The up-keeping of manors, the understanding of them as valuable heritage has been an issue in the three countries for the last century due to reforms in 1920s; the Soviet occupation; and the new social and political challenges since the restoration of independence.

Overall it was a very good campaign and we are proud that we were part of EYCH (European Year of Cultural Heritage) celebrations. We made a lot of new friends, enhanced new networks and promoted the pride as well as the difficulties of the owners of manor houses. We enjoyed the attention of the media thus highlighting the significance of the manors as drivers of cultural, economic and regional development in the past as well as today.

Coordinator of the campaign in Estonia