The lost castle beneath the manor house: Borg Brink excavation 2022 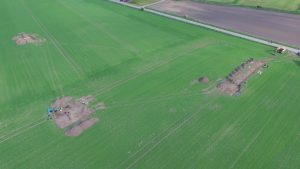 The lost manor house and former castle Brink has been excavated again on 16 May 2022. The site is situated in Southern Jutland, in Ballum-Østerende, between Ribe and Tønder. Since the early Middle Ages, the site underwent many phases: After the reformation Jørgen Hansen received the former Ribe bishop’s castle as a fief, but the manor house was completely torn down already in 1562. Its ground was sold to the local peasants and has been intensively ploughed over since that time. Aarhus University’s training excavations revealed its older history and gave evidence to an earlier dating, back to the 1200s. In the ongoing research, remains from the medieval phases appear, and many finds, including remains of animal bones, ceramics, and a large amount of brick rubble, testify to its destruction. In earlier excavations, it has also been established that the size of this castle can be compared to the likes of Vordingborg in Zealand, Kalø in Aarhus Bay, and Hammershus on Bornholm. The new excavation revealed the outer moat confirming that it was one of the largest castles in Denmark. This outer moat provided an extra layer of protection, as the period between the late Middle Ages and the Renaissance was a politically turbulent era.

Moreover, parts of the ground floor and fundaments of an older manor house preceding the central fortification were unearthed. This medieval manor was situated close to the country road from Ballum to Randrup. Topographically the site of Brink Manor and Castle is placed at a high location providing wide-ranging visibility. This would have given the owner a very strategic, decisive advantage over the surroundings.

Brink Castle and Manor still offers a lot of unanswered questions and is therefore a very prominent research location for further investigation.

Clay floor of the medieval manor house from the earstern gable as well as the surrounding sand foundation.
Photo: Aarhus University

For further information about the project: rainer.atzbach@cas.au.dk