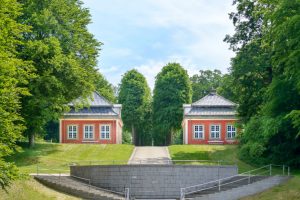 The Pavilions today, seen from the landing bridge “Kongebroen”. The avenue, which the pavilions flank, visually links the buildings with the palace. Photo: Thomas Rahbek, Agency for Culture and Palaces.

Fredensborg Palace is one the favourite residences of H.M. the Queen of Denmark. The palace is situated by lake Esrum Sø, 40 kilometres north of Copenhagen. Surrounding the palace is a vast garden, which is dominated by seven avenues, radiating from the centre of the main building. This holds the entire structure in one grip. One of these avenues leading northwest from the palace continues its perspective as a clearing in the woods on the other side of the lake. In the garden, just before the edge of the lake lies two pavilions, overlooking “Kongebroen” – a landing bridge for smaller vessels. There was originally an octagonal pavilion, where the bridge is today called the Hermitage. The pavilions served as service buildings to the Hermitage. They were probably quite modest half-timbered houses. 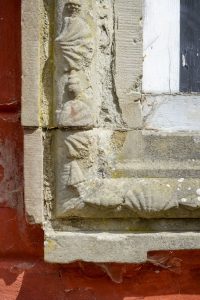 Detail of one of the window architraves with seashells carved in sandstone. Photo: Thomas Rahbek, Agency for Culture and Palaces.

It appears that the pavilions were rebuilt around 1748, this time entirely in brick. In 1765 the French neo-classicist architect N.H. Jardin remodelled the buildings entirely, although reusing the old walls. The corner pilasters were also reused along with some of the windows. The facades were given shadow joints. The attics with oval openings were carved in sandstone with rich ornamentation and so were the window architraves, whose carved out seashells suggest the content of the pavilions as their inside were decorated as artificial grottos with the walls covered with real seashells. The southern pavilion had a round room with a dome, whereas the northern had a great salon, a small hallway and two small closets.

The northern pavilion kept its overall partitioning, even after the modernization by the Danish architect C. F. Harsdorff in 1772. Apparently, the grottos were not in fashion at court anymore, and the interiors were altered into something more ordinary with panelling and painted silk hangings. The southern pavilion still has the beautiful stuccoed ceiling thanks to Harsdorff. For a few years, they were often used by the court. In the northern pavilion, the court would play cards, mainly “Pharaoh” which was a bit like today’s Blackjack, followed by dinner in the southern pavilion. On one occasion, the carriages that had been sent to collect the court returned empty; it was a beautiful evening and everybody preferred to walk back instead. 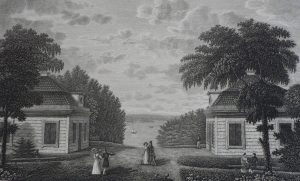 The Hermitage Pavilions in 1833. The intimate relationship with the lake is quite clear. The pavilions were originally painted white. Royal Danish Library.