The garden pavilion in the garden of Christian VII’s Palace, Amalienborg

– A neoclassical masterpiece is about to be restored 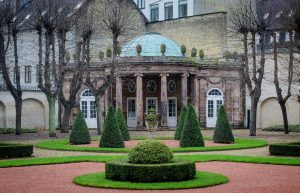 The pavilion seen from the garden. Typical for the sandstone from Bornholm is the reddish colour. Photo: Agency for Culture and Palaces. /

Of the four palaces that form the royal residence Amalienborg in Copenhagen, Christian VII’s Palace is the best-preserved mid-18th century construction. Its interiors and works are also the richest of the residences.  Extensively restored in the 1980’s and 90’s, the restoration even included a partial reconstruction of the baroque garden. Now, 25 years later, the little garden pavilion’s time has come.

This pavilion is no less than a masterpiece of the early neoclassical wave that swept over Europe in the second half of the 18th century. The French architect Nicholas-Henri Jardin, who designed it, was of the first generation of French artists to embrace the new style. For centuries, Denmark had been lagging behind the rest of Europe, always a generation late with any new style or vogue. However, with Jardins arrival in 1755, he put Denmark in front; he was avant-garde, even compared to France!

Planned as a royal square, a “Place Royale” in the French tradition, Amalienborg only became a royal residence in 1794, when Christiansborg Palace burned down. Christian VII’s Palace was built for Lord Chamberlain, Count Adam Gottlob Moltke, who was a man of not only considerable wealth, but also with a keen interest in the arts. Moltke did not just want his pavilion to adorn his garden; he wanted to show that the sandstone from the newly opened quarries on the island of Bornholm was a both beautiful and durable building material. 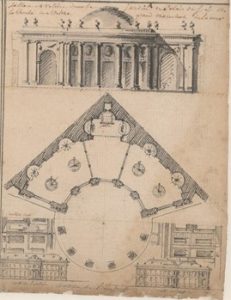 Elevation and plan of the pavilion. Behind the circular peristyle is in the middle the room for the family with stove in the niche in the back wall. To the sides one sees the aviaries with their fountains and niches with perches. Sketch by N.-H. Jardin in Danish National Art Library.

The pavilion stands as the garden’s centrepiece. The location in the corner of the garden was a challenge for the architect, who had to use all his ingenuity in order to give the building the necessary importance. The predominant feature of the pavilion is the open and domed semi-circular peristyle, whose rear part is engaged in the closed building behind. This building is divided into three sections. The middle section is where the family would have stayed. In the back wall was an oven in soapstone, probably made up to look like a pedestal with an ornamental vase on top. In niches beside it were small fountains. To each side of the building were aviaries. Each aviary had niches, in which there originally were perches for the birds to sit on, and fountains with drinking water. There were nettings in the windows to prevent the birds from flying into the glass.

When the King, Christian VII, moved in to the palace in 1794, the pavilion probably kept its function as summerhouse and aviary.  However, in 1826 the palace inventories inform us, that the fittings of the aviary were taken down, and the netting, fountains and perches were discarded. A few years later, the pavilion was converted to house a member of the palace staff. A floor was put in, thus partially dividing the building in two storeys. The pavilion stood in this state until 1892, when it was restored. Further restorations took place in 1905 and 1910, and now in 2020, the building is going to be restored once more.