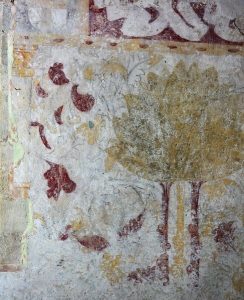 MH Detail of scene from east wall right side c.1500

The ancient EMH wall paintings were discovered in the late 1930s when the house was being used as a rectory house. The then Rector’s young son is said to have, “scratched away at the limewashed wall, thus revealing the colours beneath”. The wall paintings at EMH are among the most beautiful of their period in the country. They are also said to be, the most complete, extensive, and important domestic decoration of this date in the country. The fact that the paintings survived can be seen as miraculous, as in the 1940’s, when the house was a rectory, the walls of the house were reported as “running with water”, and that puddles were forming on the floor. When the incumbent complained about this to his superiors, no solution to the problem was suggested other than that the Rector instructed his wife to mop up the puddles with a cloth.

From the walls, which revealed their tincture, the paintings were thought (and said) to be an English interpretation of French verdure tapestry. However, in 2019 – while carrying out research to show the significance of this modest historic house – I found the paintings to be a mix of Greek Mythology and early Christian symbols.

Due to the relevant people to EMH, the architectural language, religion (as we seem to be on the trail of the Cistercian Order) and the wall paintings, I am still working to determine the significance of this modest historic building. However, I am in no doubt that EMH encapsulates Europe’s history. Thus, I am constructing an evidence-based documentary on that fact as we garner more information.