The Cellar – A Look Into the World of the Domestic Staff 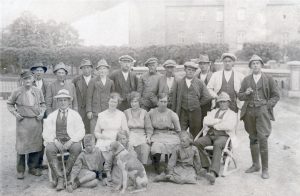 The new exhibition at Gammel Estrup – The Danish Manor & Estate Museum, “The Cellar – A Look Into the World of the Domestic Staff”, consists of a number of newly renovated rooms in the cellar below the manor Gammel Estrup. The rooms here are now furnished so as to give an impression of the daily life and chores of the domestic staff approximately 100 years ago. Guests can now visit the cellar hall, where the servants once ate at long tables and spent their meager leisure time.

The rooms in the cellar were indispensable too many daily tasks carried out at the manor, but they were near invisible to the outsider and located far from the State Rooms: “In the cellar, we have descended into the world of the servants, a place where the lordships rarely came. Here we find many facilities essential to the manor’s household such as a storageroom for firewood, a laundryroom, pantries, utilityrooms, a wine- and beercellar, an ironingroom etc. At some manors the kitchen and several of the servants’ rooms were also located in the cellars,” museumcurator and responsible for the renovation and new exhibition at The Danish Manor & Estate Museum Marie Aaberg Andersen tells.

The new exhibition has got many hands on elements: children can play in a “manor house kitchen” with a cast iron stove, dress up as servants or listen to different stories about the life at the manor passed down from the staff who once worked here. Marie Aaberg Andersen says: “Here you can touch everything, you are allowed to open drawers and doors and lift the heavy iron pots from the stove. You can put on servants clothes or crawl into the barrels and troughs.”

The new exhibition draws on some of the results of the research in the domestic households of the Danish manors and estates carried out by the The Danish Research Centre for Manorial Studies. 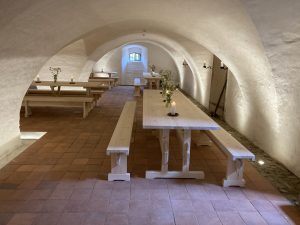