The history of domestic servants at the country house also touches upon the histories of material culture and consumption, relations between the country house and its surrounding rural area, as well as links to urban spaces. It raises questions of social mobility and individual careers, of labour conditions, and of service across the lifecycle. Importantly, servants were a ubiquitous part of the social life of country houses across Europe. Bringing together research from the United Kingdom, Germany and Denmark, this seminar explores those who worked in domestic service in the country house in the long eighteenth-century.

The seminar will include six presentations. A preliminary programme is listed below:

Introduction to the Gammel Estrup project and the first steps to creating a Danish country house servants’ database.

The research centre at Gammel Estrup is planning to create a database of servants at the 727 country houses already registered in the centre’s country house database. The aim of this work is to track the number of employees at country houses, their job descriptions and marital status, birthplace, etc., from the first public census in 1787 to the beginning of the twentieth century, when entailed estates were abolished. Taking the Danish censuses of 1787 as a point of departure, this talk will present some preliminary findings from the project, discussing problems of determining the extent of the country house household in different cases – how do we distinguish workers in the main building from those at the home farm, and how may we place the servants within the wider community of the estate?

Gamekeeper, Farmer, Gentleman: How Servants Defined Themselves on the Eighteenth-Century Chatsworth Estate

The difficulty of defining service has been well recognized by historians who have acknowledged the fluidity which could exist between service, family relations and casual labour. Choosing when or if to define oneself as a servant could also be a challenge for individuals who had access to a range of occupational identities formed from multiple by-employments which co-existed alongside their work as servants. Using probate documents, grave monuments and household accounts, this talk will examine the language servants at Chatsworth chose to describe their occupations at certain points in their life cycle, the influence the environment of the country estate and a rural audience had on their choice of language and how this compared to the choices made by their London counterparts.

Making them invisible. Servants’ lives on manors in eighteenth-century Denmark-Norway.

In the eighteenth century, particular stairwells and corridors for servants were built in several big houses around Europe. This talk takes such architectural changes to one building, the Eidsvoll house in Norway, as its starting point to investigate the lives of and views on servants in big houses in eighteenth-century Denmark-Norway. Eidsvoll House has a particular role in Norwegian history, as it became the place where the Norwegian constitution was written in 1814, a constitution which gave large parts of the population the right to vote.

Food and Consumption Below Stairs – Servants and their Provisions in German Country Houses, 1770-1840

Food was a valuable commodity in past times and its consumption carefully monitored. Housewives and housekeepers kept detailed accounts of stocks and purchases, landlords and stewards recorded the ingoings and outgoings of grain and livestock. These records provide a rich picture into the consumption habits at the country house above and below stairs. In this paper, I want to concentrate on food consumption by servants. What kind of food did they get? How much and how often? Did they participate in the extending range of victuals, namely Mediterranean delicacies such as lemons, raisins, capers and olive oil, colonial goods such as sugar, coffee and tea, and spices from overseas? And are there changes that can be observed during this seventy-years timespan?

The governess, the dancing master and other transnational servants in eighteenth-century Danish country houses

This presentation will explore the lives of employees who came from international backgrounds to work at the country house. From hiring a Swiss governess, to the employment of a French dancing master, or a manservant who may have come from the West Indies, the country house was a space where people from diverse backgrounds met and worked under the same roof. Focusing on the international employees of the Reventlow, Schimmelmann and Scheel families, this paper will examine their backgrounds, motives for hiring international staff revealed in their employers’ letters, and the individual servants’ options and agency, or lack thereof. It uncovers the heterogenous experiences and conditions of servants who moved across borders to serve at country houses in Denmark, or to serve their masters and mistresses abroad. 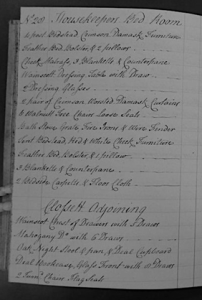 This paper examines the changing nature of servants’ rooms in English country houses. Through detailed analysis of inventories and sale catalogues, it explores how the furniture provided for servants marked their status within the house, but in ways that were nuanced by their specific role and by their gender. It reveals a basic but rising level of provision for all servants, and the distinction accorded to senior servants through a greater range and quality of furniture, much of it assembled from elsewhere in the house. The analysis serves to refocus attention onto servants as people as well as workers and to enrich our understanding of their material world.

The seminar will be held via Zoom. To participate, please send an email to seminar@gammelestrup.dk

A link will be sent to participants one day before the event.