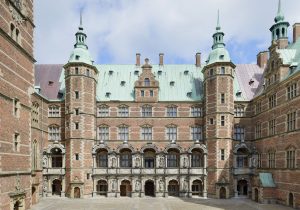 The Marble Gallery as it is today when all the sculptures on top of the arcades have been taken down for security reasons.

For 400 years, the Marble Gallery has adorned the King’s Wing at Frederiksborg Castle. When Christian IV had the castle built between the years 1601-1620, it was decorated with portals, sculptures and ornaments that were reminiscent of the architecture of ancient Rome. These decorations formed a setting that would give the learned visitor an allusion to a triumphal procession of a roman emperor. As such, the decoration of the castle forms a visual expression of royal power. It was designed with a splendour which increased the closer one got to the king’s residence, culminating with the Marble Gallery at the entrance to the King’s Wing.

The architect Hans Steenwinkel the Younger designed the gallery’s structure in polished red and black limestone. The gallery got international attention, which at the time was unusual for Scandinavian architecture, when the design was published in a book on the works of the Dutch architect and sculptor Hendrik de Keyser, including works of de Keyser’s apprentices, “Architectura moderna ofte bouwinge van onsen tyt”, Amsterdam 1631. Among de Keyser’s apprentices was Steenwinkel, whose family originated from the Netherlands. Several members of this dynasty of architects worked for the kings of Denmark from the latter part of the 16th century, and continued to do so until the end of the 17th century.

Steenwinkel’s design for the gallery in the book on de Keyser and his apprentices’ works from 1631, “Architectura moderna ofte bouwinge van onsen tyt”.

The reason why Hendrick de Keyser knew of his apprentice’s gallery for Frederiksborg Castle, is that the gallery’s 19 statues and 13 reliefs were made in his workshop in Amsterdam. The work is attributed to Geeraert Lambertsz, one of the sculptors attached to the workshop. The sculptural decorations made in sandstone from the king’s own quarries in the island of Gotland (today in Sweden) depicts gods and heroes from ancient Greco-Roman mythology. The leading artisans and craftsmen of the day were deliberately employed in the design of the Marble Gallery not only to showcase the best in contemporary architecture and sculpture, but to convey to the world that Christian IV was a learned and powerful ruler.

Statue of goddess from the gallery that probably depicts Ops or Cybele. The work is attributed to Geeraert Lambertsz, Amsterdam 1619-21.

The Marble Gallery has been restored several times, and one of the most extensive restoration projects followed a devastating fire in 1859. The gallery was subsequently rebuilt under the direction of the architect Ferdinand Meldahl, and any original sculptures and reliefs to survive the fire were removed and placed in storage. In their place came copies in zinc, which at that time was a new and less expensive material. In the 1940’s and the 1950’s, students from the Academy of Fine Arts, under the direction of Professor Einar Utzon-Frank, began work on the statues. However, the work was never completed and for years, the sculptural decoration remained a mixture of zinc and stone. All of the zinc reliefs were replaced in the 1960’s with new reliefs carved in sandstone by the sculptor Mogens Bøggild’s students at the Academy of Fine Arts. The most recent modification to the gallery was in 2009-2011, when, for safety reasons, The Agency for Culture and Palaces removed the sculptures on the top of the gallery’s arcades.

Exposure to the elements has caused damage and deterioration to the gallery’s structure and decoration, and so, to prevent further loss to the historical and architectural significant work, it is necessary temporarily to take down parts of the gallery’s decoration for repair. Preparations are now underway for a major restoration of the gallery’s distinctive architecture and sculptures. Once the restoration is complete with sculptures in the niches and on top of the arcades, the gallery will regain its former glory.

The restoration is being led by The Agency for Culture and Palaces in cooperation with The Museum of National History, whose research into written as well as visual sources documenting the history of the gallery forms the basis for the restoration. The project is supported by The Carlsberg Foundation and by The A.P. Møller and Chastine McKinney Møller Foundation.