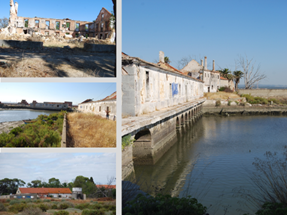 The ruins of Quinta Braamcamp today.

During the confinement of the pandemic, we keep going with the research project about the Quintas in the Team ESTEJO, under the patronage of the Lusiada University of Lisbon, and financed by the FCT- the government foundation for scientific research. We also develop several projects with the Association of Friends of the Botanic Garden of Ajuda, as member of the Board of Directors. All this time we make good progress in the understanding of the cultural landscape and on the construction of a file and a data base of the Quintas of the estuary, with the delimitation of the research area which is a vast area that covers several municipalities and towns within the metropolitan area of Lisbon, and the Community of the Lezirias, belonging to NUTS II and III. The works of evaluation and assessment of the diversity and complexity of the projects, put us in contact with the present situation of this heritage, and lead us to a parallel work of evaluation of the present state of conservation and list urgent measures of protection and preservation of the main lines of the projects. We realize that the research must also be a way to contribute to a daily awareness and an improved knowledge among management technicians and owners of the Quintas, either  public institutions or private owners. We have started working together with cultural associations, promoting exhibitions and meetings to highlight the urgent needs of the Quintas and to give visibility to this heritage, that remains central in economic and social issues and in the master plans of the metropolitan area. We are fighting for better protection of the Quintas, we aim to promote an academic debate and lead this issue to an international level in the European Union. 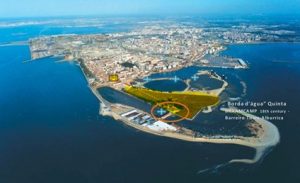 An example of an unique nineteen century landscape estate ”Quinta” in the south bank of the estuary, built in sand banks and facing the hills of the historic center of Lisbon.

In the moment we are working on a case study that goes back several years and that remain unsolved and need urgent protection: The Quinta Braamcamp. The Quinta is example of a unique nineteen century landscape estate, ”Quinta”, in the south bank of the estuary, built in sand banks and facing the hills of the historic center of Lisbon. The Quinta was built in the second half of the nineteenth century by an aristocratic family of Dutch merchants, the Braamcamps, who were linked by marriage to an aristocratic Portuguese family the Cruzes Sobraes, latter barons and counts of Sobral. The Landscape Estate was built by the water, and it is a place for recreation of the senses, to show social status, with astonishing panoramas, supported by aligning axes who frame the skyline of Lisbon and several notable focal points of the surrounding landscape. The green and the built structure were the support of a silkworm factory, a giant wind mill, a monumental tide mill and the palace linked with the sanctuary church of our lady of the Rosario – an ideal romantic, picturesque landscape, surrounded by the watermirror of the estuary, with the reservoirs and dams of three other tide mills, together with four wind mills built in sand banks in a very fragile landscape. The territory is owned by the municipality and is part of the historic center of the town of Barreiro. The municipality wants to urbanize against the will of the cultural associations of the town, who want to see built there a cultural center, a sports center, a restoration touristic center and an interpretation center to tell the history of the place.

OTHER PROJECTS LAUNCHED DURING THE PANDEMIC… TO SHOW THE HERITAGE OF THE QUINTAS:
MAGAZINE COLUMN …THIRTY MINUTES TO GET TO KNOW THE QUINTAS OF THE ESTUARY
We promote the edition and write a column in a Portuguese magazine about gardens “JARDINS”, with national circulation. A monthly column, each issue tells about one of the regions of Quintas of the estuary with photos and the history of the Quintas and with information about how to visit. Monthly articles from 2019 until 2021.

CYCLE OF DIALOGES IN THE BOTANIC GARDEN OF AJUDA … THURSDAYS TO TALK ABOUT THE QUINTAS
A cycle of Dialogues “DIALOGOS”, in the Botanic Garden of Ajuda, that began last December about the historic gardens the Quintas landscape estates of the tagus estuary. The cycle included discussions and opinions about the QUINTAS and the heritage of the gardens and landscape estates. Thursday afternoons each month from five to seven o’clock, in the green house of the garden, around tea and cakes.

GUIDED TOURS …SATURDAYS IN THE LANDSCAPE ESTATES OF THE TAGUS ESTUARY
The cycle of guided tours called … AOS SABADOS NAS QUINTAS …promoted by the association of friends of the Jardim Botanico da Ajuda is a cycle that began in 2018 and which has already visited several dozens of Landscape Estates, built over centuries, in the territory around the water mirror of the Tagus Estuary, belonging to the heritage of twentyone municipalities. The program of a day begins in the Botanic Garden Jardim Botanico da Ajuda, in Lisbon, and include a full day trip and visit to a specific area of Quintas. 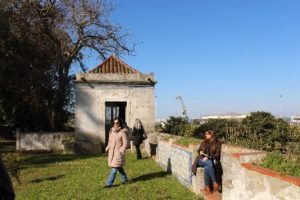 Visit at the quintas of Borda d’Água. 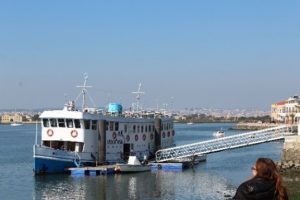 boatcrossing of the estuary “boat restaurant”.