New book on castles and palaces, churches and chapels, knights‘ residences and manor houses on Rügen 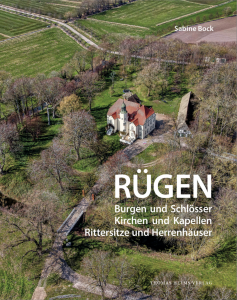 Rügen, an island between Denmark and Germany, which saw many failed missionary attempts from the south, west and east. It was not until 1168 that the Danish King Waldemar I and his commander, Bishop Absalon, succeeded in conquering and Christianizing the island of Rügen. Until the Reformation, the island belonged to the Danish bishopric of Roskilde. Twenty-seven churches were built between the 12th and 15th centuries. In Ralswiek, the bishops of Roskilde owned a large estate called Tafelgut. Since the early modern period, more than 200 manors have been built on the island, and more than 150 manor houses have been preserved.

For almost forty years professor Sabine Bock has been studying the island of Rügen, its manor houses and churches. The idea of viewing and presenting these monuments together has occupied her for a long time. Now the result is available. This comprehensive book presents the island‘s lost and preserved castles and palaces, churches and chapels, knights‘ residences and manor houses. Special attention is paid to the evidence of the Rügen landowners in the churches. They donated parts of the furnishings, were buried here and epitaphs commemorated them after their death.

Concise texts present the churches and their furnishings, the castles and manor houses with their history, the owners and tenants as well as their building history. Historical plans document the development of the manors before 1945. The manor houses are often presented in series of pictures documenting their fate after 1945.