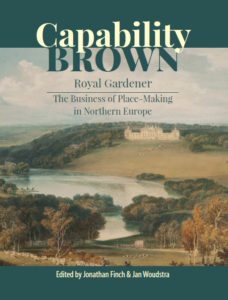 Lancelot “Capability” Brown was one of the most influential landscape designers of the eighteenth-century. The extent and nature of his influence are, however, fiercely debated. Brown was fêted in his time, and recognised by the Crown, but his style was readily copied over his later life and particularly after his death. Arguably, this ubiquity led to the denigration of his achievements and even his character. The lack of any personal primary material from Brown – forcing scholars to rely on his landscapes, contracts and bank accounts – has hindered attempts to provide a rounded and credible account of the man and his works. However, by exploring his team of associates and his role as Royal Gardener, Capability Brown, Royal Gardener throws new light on the man, his landscapes and legacy.

Bringing together a number of perspectives from across Northern Europe, this new collection explores the lasting international impact of Brown. It brings focus, for the first time, on his business methods, working methods and European influence. It assesses how, crucially, Brown’s work practices placed him within the world of nurserymen and landscape designers, and how his business practices and long term relationships with draughtsmen and designers allowed him to manage a huge number of projects and a substantial financial turnover. This, in turn, allowed him to work in a way that promoted and advanced his style of landscape.

Edited by Dr Jonathan Finch (University of York) and Dr Jan Woudstra (University of Sheffield), and with a varied range of engaging contributors drawn internationally from archaeology, art history, history and landscape architecture, Capability Brown, Royal Gardener weaves together strands from across a broad range of disciplinary interests. Making an important contribution to the scholarly discussion of Brown’s work, the work of his collaborators, and legacy in the UK and across Northern Europe, this exciting new volume throws new light on Capability Brown and his impact on the business of place-making in Northern Europe.

Seeing an Eden from a Desert: Topographical Views of Kew and Richmond Gardens in the 1760s: Matthew Storey

Lancelot Brown’s Legacy of Landscape Practice: Samuel Lapidge ‘Who Knows My Accounts and the Nature of Them’: Jan Woudstra

The English Garden in Germany: Some Late Eighteenth-Century Concepts of the Landscape Garden: Michael Rohde

Lancelot Brown and the Notion of the Landscape Garden in the Netherlands: Illustrated with Het Loo Palace: Jan Woudstra & Willem Zieleman