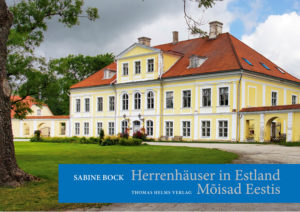 In the Spring 2020 the richly illustrated, bilingual book (German/Estonian) about »Mansions in Estonia | Mõisad eestis. A short overview of the development of their forms and their history | Lühike ülevaade ajaloost ja ehitusvormide arengust« was published. (https://thv.de/buch/herrenhäuser-estlandmõisad-eestis)

It shows the development of the German-Baltic manor houses in the context of the different power relations and their fate after the end of the estate economy.

The Republic of Estonia, founded in 1918 and re-established in 1991, is part of the historical cultural landscape of the Baltic Sea region. It includes historical Estonia and northern Livonia. The country and its inhabitants were determined by changing powers until the country gained independence and finally between 1940 and 1991. First, with the Christianisation, it was the Danes and the German Order of the Brothers of the Sword, then, as early as the 13th century, the Teutonic Order succeeded in integrating large parts of the country into its sphere of power. The Reformation brought the end of the Teutonic Order state and awakened different desires. Northern Estonia subordinated itself to the Kingdom of Sweden, Livonia came as a duchy to the noble republic of Poland-Lithuania and the island of Ösel etc. became Danish. In 1629 Sweden also conquered the islands and Northern Livonia, but in 1721 the Russian Tsarist Empire succeeded in making Estonia, Ösel and Swedish Livonia Russian provinces. Between 1795 and 1918 the whole Baltic States belonged to the Russian Empire. The then emerging Republic of Estonia first brought the end of foreign rule. But between 1940 and 1990 Estonia was again not independent as part of the Soviet Union.