Micro-degree in the Baltic-German Culture at three universities

In Estonia and Latvia the former nobility and manor owners were known as Baltic-Germans despite the fact that in addition to Germans the nobility was made up of Swedes, Danes, Polish and Russians. Also clergy and merchants were mostly of foreign origin, thus the foreigners had the leading position from 13th century till the creation of independent nation states in 1918. The common name Baltic-Germans dates actually only from 19th century expressing also the fact that German was the uniting language for the upper class. Although the number of foreigners was small they had a huge influence on the society and culture.

Three Estonian universities that teach subjects related to history and culture created a joint micro-degree to share the knowledge on the culture of the Baltic-Germans to the wider audience. The available courses of Tartu University, Tallinn University and Estonian Academy of Arts cover the history, literature, language, architecture, art, archives, conservation, tangible and intangible heritage. The preparation of the micro-degree to be launched in September 2022 has been an  interesting and mutually enriching experience for three universities and the high number of registered participants has been a pleasant surprise.

Department of Cultural Heritage and Conservation 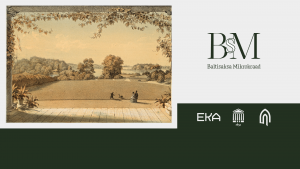