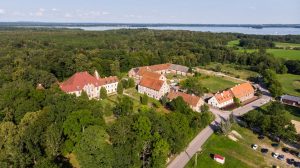 The manor of Steinort, built in the early East Prussian baroque age (1689-1691), was Prussian up to 1945, today it is situated in Mazuria/Poland (Sztynort). More than 500 years it belonged to the same family, the Counts of Lehndorff. The last heir, Heinrich von Lehndorff, was executed as a member of the uprising of 20th of July on September 4th 1944. NS-Foreign Minister Ribbentrop chose the westwing of the manor as his residence, only 17 km off Hitler´s headquarters „Wolfsschanze“. After the war the palace went through a diverse history and remained a sleeping beauty between 1985 and 2010 when the Polish-German Foundation of Preservation of Culture and Conservation (PNF) bought it for a symbolic contribution. Steinort is a unique place, the last complete big estate in East-Prussia, including the manor, stables, barns, storages, workshops and housing estates for the farm workers. But many of the buildings are in a ruinous condition. Together with a German sister-foundation (DPS) and Lehndorff-Gesellschaft Steinort (LGS) huge efforts are being made to save and return the site to new use. In order to maintain this process PNF filed an application to the Polish Program „Kultura“ at the Norwegian Fund. We are now waiting and looking forward to a grant of 3 Mio. € to advance plans for the restauration of the building and bring new life to Steinort: An academy, a museum and facilities as a guest house are planned. And the whole thing is also located in the middle of a holiday resort of an investor (KingCross, Brescia).

The combined functions of Steinort as a cultural centre including education, vocational training, research, cultural activities etc., with many actors and donors involved, makes the Steinort Project very special and challenging. But people are curious, excited and looking forward to the new old palace. There is encouraging widespread support and acceptance of the resurrection of the place in the whole surroundings what makes networking much easier. Steinort is on a good way to regain its traditional role as a cultural heart of the whole surroundings and, in a larger context, a central player in north east Europe.

One main thing to re-establish Steinort as the cultural center of the region is the Steinort Festival. Established in 2017 by cultural anthropologist Hannah Wadle it grew larger, more diverse and more popular every summer. The festival gives artists in different stages of their carreer the opportunity to exhibit their work in correspondence to special Steinort-centered themes, that change every year. The pieces of art may be daring, experimental and interactive and create new narratives and perspectives at this special site. In 2020 however, the corona pandemic threatened the festival as a whole and new solutions had to be created short-term. So this year the audience on site had to be kept small. On the other side new forms of publication had to be tried out. In the end, 5000 visitors watched the festival on site, but no less than 38.000 shared the events online or via social media. Thus corona did not get down the Steinort Festival – on the contrary.