The manor of Laurvigen – a future baroque garden hotspot? 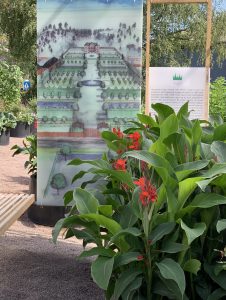 As the town of Larvik in Norway is celebrating its 350 anniversary September 29th, 2021 (www.vi350.no), new interest in the 17th and 18th century of the manor of Laurvigen (Herregården i Larvik) and the old hidden garden beneath the ground has arisen. The municipality has in cooperation with Vestfoldmuseene, made a step-by-step strategic plan to prepare for the coming political decision; Should the area be reserved for reconstruction and revitalization of the first and largest baroque garden in Norway, or should the area with the old school buildings built around 1900 be converted into new use and regulated for urban development? Four important initiatives that has been taken.

1 In the proposal for the masterplan for the town of Larvik, a larger area with several baroque remains, and buildings has been analyzed and suggested to be refined as the “Old Town of Larvik”. The manor and the reestablishment of the surrounding garden together with the strengthening of the connection to the 17th century church and the old harbor, is pointed out as key elements for this area to become a future attraction and baroque garden hotspot.

2 To bring forward the early modern history of Larvik as a contribution to the national history of Norway, the municipality and Vestfoldmuseene has applied for governmental support. Larvik plays a unique role in the history of Norway’s union with Denmark from 1660 – 1814.

3 In the search for knowledge professor Annegreth Dietze-Schirdewahn from the Norwegian university of Life Science and archaeologist Trude Aga Brun from the county of Vestfold and Telemark together with the municipality and Vestfoldmuseene has initiated a project to start excavation of the garden and look into the comprehensive number of documents in the historical archives from the era of absolutism. The project is supported by the Norwegian Directorate for Cultural Heritage.

4 To make the people of the town of Larvik aware of their historical heritage and see the potential of what the hidden garden has been and can become, students from the Norwegian University of Science and Technology were invited to create a pop-up garden and a construction to explain the axes and the view that Ulrich Fredrik Gyldenløve, the Danish Count and founder of the town of Larvik, was looking for in his original layout of the magnificent garden. “Accelerator” is a part of the celebration of the anniversary, with several events and activities arranged in September, before the garden is to be removed in October. 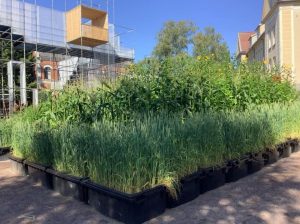 Now it is up to the local politicians to reveal their ambitions for the manor of Laurvigen and decide if the concept for a baroque garden hotspot and “Old town of Larvik” will be a reality for future generations to discover and experience.