Call for partnerships with other programs of volunteering in historic gardens or landscape estates.

After successfully launching a volunteering program in the Botanic Garden of Ajuda the Associação dos Amigos do Jardim Botanico da Ajuda (AAJBA) would like to share their results so far and call out for partnerships with other historic gardens or landscape estates with similar projects.

Volunteering in the Botanic Garden of Ajuda 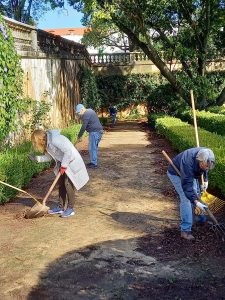 The botanical garden of Ajuda with 3,5 hectares situated in Lisbon, is the oldest botanical garden in Portugal. Laid out in the 18th century by the Marquis de Pombal the prime minister of king José I, for the education of the princes, it is now a Portuguese national heritage site managed by the Institute of Agronomy at the University of Lisbon. It was one of the gardens chosen by the European Commission to be rehabilitated as a European Pilot Project in 1993, the European Year for the Historic Gardens. After the works of Rehabilitation, it was ceded the AAJBA an association of friends of the garden, that promote workshops, seminars, guided visits to gardens in Portugal and International tours to world landscapes and historic gardens. With the profits from these activities the association pays several works of management and rehabilitation of the garden.

After being closed for two months due to Covide19, the garden was in a pitiful state. We as governing members of the Association, during the confinement of the covide19, after a meeting in Zoom, decided to launch a volunteering program, inviting the associated and people in general to help in the works of gardening to reopen the garden. The results were unexpected, we had more than 30 registrations.

In September we had a welcoming session by the members of the association and by the director of the garden and with the resident body of four gardeners, we presented the garden and the tasks that needed taking care of – everybody was very enthusiastic! Until today we have had groups of around ten volunteers, three mornings a week for two hours, respecting all the protection rules for protection against Covide19. 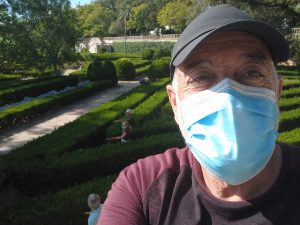 We aim to make partnerships with other programs of volunteering in historic gardens or landscape estates in other European countries to exchange methodologies and experiences.