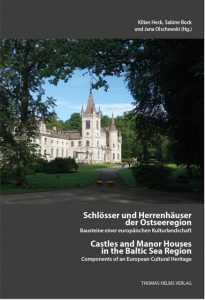 The post-medieval castles and manors, up to the present, are a central piece of the profane monuments in all European countries, as testimonies of ruling-class architecture castles and manor houses are important objects of building history and their exploration. Their content and formally aspects have always been made a subject of academic discussion.

Although researchers had been a long time aware of the regional distinctiveness of manor houses in the Baltic region, the awareness of the common historic cultural landscape of estate economy in the countries of the Baltic Sea region developes slowly.

In October 2012, the Caspar David-Friedrich-Institute of the Ernst-Moritz-Arndt-University of Greifswald organized an international symposium “Schlösser und Gutshäuser in der Ostseeregion. Bausteine einer europäischen Kulturlandschaft – Castles and Manor Houses in the Baltic Region – Components of a European Cultural Heritage”. In all, 21 scholars from Denmark, Sweden, Estonia, Latvia, Lithuania, Poland, and Germany presented their papers about castles and manor houses in the Baltic Sea region at the symposium, 14 of which now can be submitted in these conference proceedings.