Leonhard Christoph Sturm and the theory of architecture in the early 18th century.

The RECS-Colloquium at the Charlottenburg Palace, Berlin, on December 6th 2019 Leonhard Christoph Sturm (1669-1719) was born 350 years ago in Altdorf, next to Nuremberg,  Southern Germany, as a son of a professor of mathematics at the local university. Having completed his studies in theology in Altdorf, his career led him throughout several teaching positions in Jena, Leipzig and Wolfenbüttel, before he was appointed professor of mathematics at the Viadrina University in Frankfurt (Oder). Holding the Chair for Mathematics, he became well known as a specialist in theory of civil and military architecture and in constructions analyses. Less known are his further interests in geography, cartography or in creating of collections and in education of custodians. Having a good reputation, he was commissioned as an evaluator of the construction problems at the Royal City Palace in Berlin and became a member of the Prussian Royal Society of Sciences. Although in his latest years he moved from academia to industry by becoming a “Baudirektor” in Schwerin, he did not get the expected opportunity to carry out some truly outstanding objects there. The exceptional importance of Sturm lies in his enormous versatility and productivity as a theorist of architecture. He published all in all 50 books on different types of architecture and 25 books on theology and other subjects. Many of his books are considered an important contribution to the essential problems of the church, castle or manor design. In term of architectural style, he was known to prefer classical solutions and their variations. This discloses his further sources of inspirations originating from Holland and France.

Different aspects of the theoretical and practical activities of Sturm will be discussed by the following colleagues from different European universities:

The Colloquium aims to provide fresh insights into the recent findings about Sturm and the wider context of his thoughts and activities. The event, organized by the Chair of Heritage Studies of the European University Viadrina in Frankfurt (Oder), shall be a tribute to the great theorist on the occasion of his 350 birthday. At the same time, the Colloquium is going to initiate the activities of the Research Center Sanssouci (RECS) in its new structure, joining together the following three institutions: The Foundation for Prussian Castles and Gardens (SPSG) and the Brandenburg Universities both in Potsdam and in Frankfurt/Oder.

The lectures within the Colloquium will be held in German. The participant fee amounts to 10 Euro; payments should be made until 20th November to the following account: 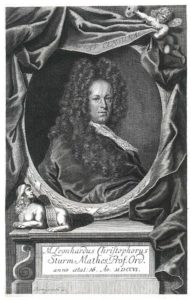